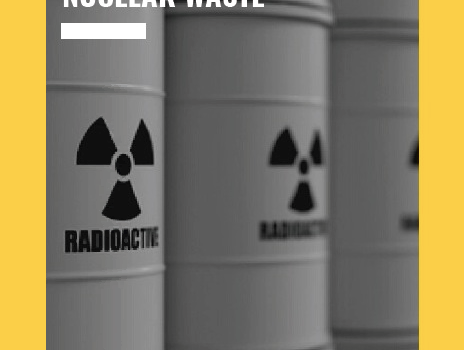 Context :
While France, the Czech Republic, Hungary and Poland have slowed down negotiations on carbon neutrality for 2050 by imposing the nuclear sector on the table, Member States have finally found an agreement on the « green taxonomy » on December 16, 2019. To be eligible, the technologies will have to pass a strict “do not significant harm” test (DNSH) a strict test “do no significant harm”. One of the elements of this test is that an economic activity cannot be considered sustainable “where the long term disposal of waste may cause significant and long-term harm to the environment”. What about nuclear waste management?

Nuclear energy has been use for more than 60 years, but no country has yet found how to safely manage nuclear waste. The amount of nuclear waste continues to accumulate around the world. European countries have produced several million cubic meters of nuclear waste (without even including uranium mining and processing waste). Taking into account the entire nuclear fuel chain, at the end of 2016, France, the United Kingdom and Germany were the largest producers of nuclear waste in Europe.

Around the world, the nuclear industry, with the support of governments at various levels, maintains the choice of geological storage of spent fuel, the most dangerous nuclear waste. However, no existing site or « laboratory » under study in the world has proven itself, far from it. The only two deep underground storage facilities in operation found themselves faced with insoluble problems following accidental situations (the case of WIPP/USA and the case of ASSE / Germany).

This international symposium organized at the European Parliament in Brussels will be an opportunity to understand what is happening in France, Belgium and Sweden, where there are still great uncertainties for a scientific justification for storage, as well as obstacles to the realization of these projects, which revolve around questions of political, legal, financial and public acceptance.

» The implementation of the Radioactive Waste Directive 2011/70 / EURATOM  »

by Mr Garribba, Director of Nuclear Energy, Safety and ITER at European Commission’s Directorate-General for Energy

« Sweden: the current blockage of the geological storage project »

« Belgium:the absence of the national program on radioactive waste management »

« Expert report in the context of the public debate in France on the management of radioactive waste »
by the author of the report, Emmanuel Didier, sociologist, research director at CNRS

« The financial incapacities linked to the Cigeo project »